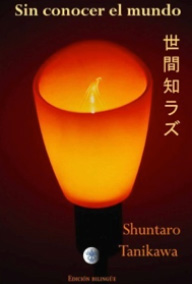 Poetry is the “wide world behind the slots of the conscience” says Shuntarō Tanikawa when he turns his poems into interrogations. In the book Sekenshirazu (Sin conocer el mundo, in Spanish) he portrays death, poetry, lack of communication and hope in a novel and simple manner that reveals poetic mirrors between Japan and the Occidental world. The poet questions the language, words and the act of writing, while holding a mysterious contempt and attraction towards poetry while he writes it. Among the versatile and vast work of Tanikawa, where he would play with words and colloquialisms impossible to translate, Sin conocer el mundo shows us a human being well connected with his inner world and the cosmos: there is no localism in the death of a father neither in poetic creation. – Cristina Rascón, translator.